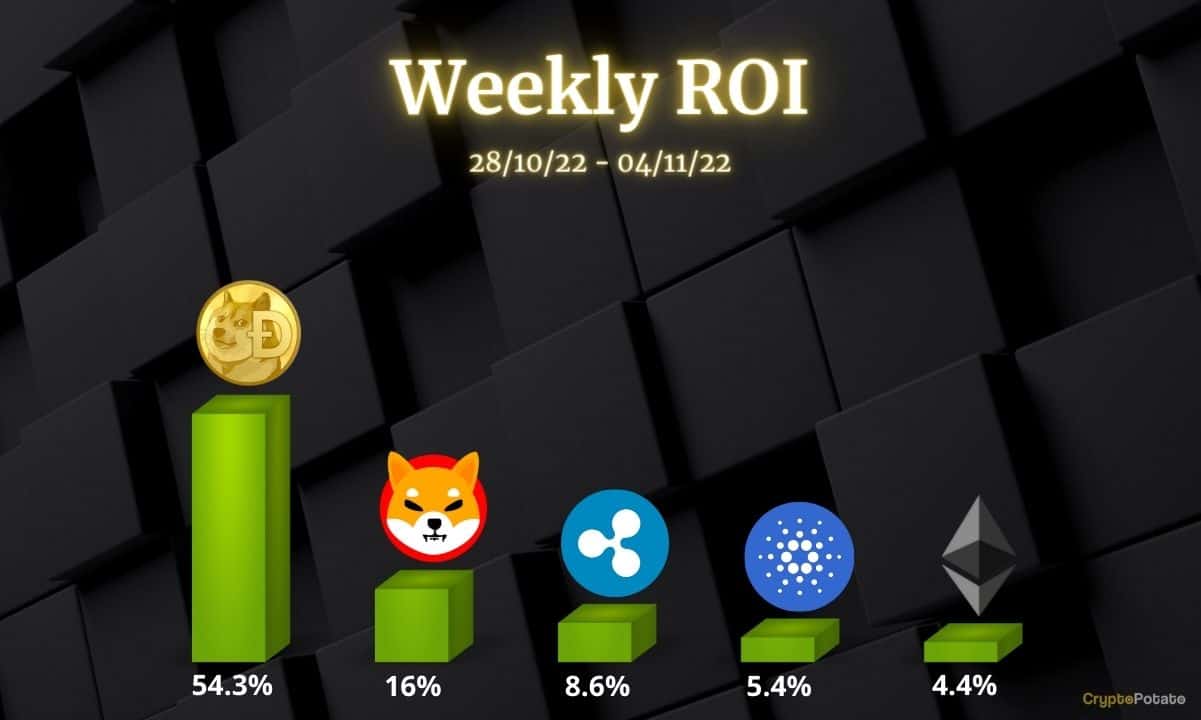 This week, we take a closer look at Ethereum, Ripple, Cardano, Dogecoin, and Shiba Inu.

Ethereum appears keen to return to the uptrend. This has allowed the price to book a 4.5% increase in the past seven days. If the current momentum continues, then ETH may attempt to challenge the key resistance at $1,725 in the coming week.

The support levels are found at $1,500 and $1,380, with the former having done a good job of stopping sellers two days ago. As long as the price action continues to make higher lows, the bias is skewed toward the buy side.

Looking ahead, ETH has turned indicators such as the daily RSI and MACD bullish in late October, and this appears to continue into November. For this reason, a test of the key resistance at $1,725 could be expected. A breakout above this level would be extremely bullish, while a strong rejection could turn sentiment bearish again.

XRP has failed to move away from its key support at $0.44. This has been ongoing since mid-October and is a sign of weakness. This lack of momentum means that the cryptocurrency is now found at a similar price to seven days ago.

Nevertheless, the fact that buyers managed to keep XRP above this support signals that sellers are also not that interested either. Hence, the price is found in an equilibrium that is likely to break one way or another. The current chart gives a slight advantage to bulls because this consolidation period could be interpreted as a pause before the next push higher.

Looking ahead, XRP may return on the offensive with the aim to break the key resistance at $0.55, which has so far stopped any advance in the past two months. It is too early to call this now, but the indicators are starting to curve back up on the daily timeframe. If volume resumes, XRP will rally again.

Similar to Ethereum, ADA appears keen to move higher again after a short correction last week. Bears did not allow Cardano to move above the key resistance at $0.42, but now the price is ready to try again. In doing so, this cryptocurrency booked a 5% price increase in the past seven days.

The support at $0.38 has held well the correction from last week, and the price is unlikely to revisit this level any time soon. If volume returns, Cardano is well placed to continue higher and maintain its bullish momentum, which started back in late October.

Should the price manage to break above $0.42, then ADA has an open path toward $0.50, which would be the next key target to watch for. The daily indicators remain bullish, and the only thing missing is volume. If this returns next week, then ADA is likely to move higher.

After a rally that took the market by surprise, Dogecoin has finally decided to take a break from its explosive moves and consolidate above the $0.11 support level. Even so, in the past seven days, DOGE has managed to book an eye-popping 58% price increase, making it the best performer on our list this week.

With Elon Musk taking control of Twitter, anything is possible, including making Dogecoin one of Twitter’s go-to cryptocurrencies for payments.

Looking ahead, DOGE may continue to rally with the next target at $0.19. However, this may be contingent on more bullish news, which, if missing, may stall the momentum and push this cryptocurrency into a stronger pullback to the key support.

Shiba Inu’s price action tried to mirror Dogecoin, but it did not receive the same level of attention. Despite this, SHIB still achieved excellent performance with a 17.5% price increase in the last seven days. In the process, the key resistance at $0.000014 was touched briefly before a pullback followed.

The support is at $0.000010, and SHIB used this level to launch its rally once Dogecoin started to move. It would appear that the appetite for meme coins is increasing, which highlights that market participants are ready to take more risks, and this is bullish.

Looking ahead, SHIB should continue to follow in the footsteps of Dogecoin, therefore best to closely monitor the price action of DOGE as it has become a reference index for meme coins. The biggest challenge for Shiba Inu at this time is to break the key resistance. If successful, then expect to see the price quickly move toward $0.000018.