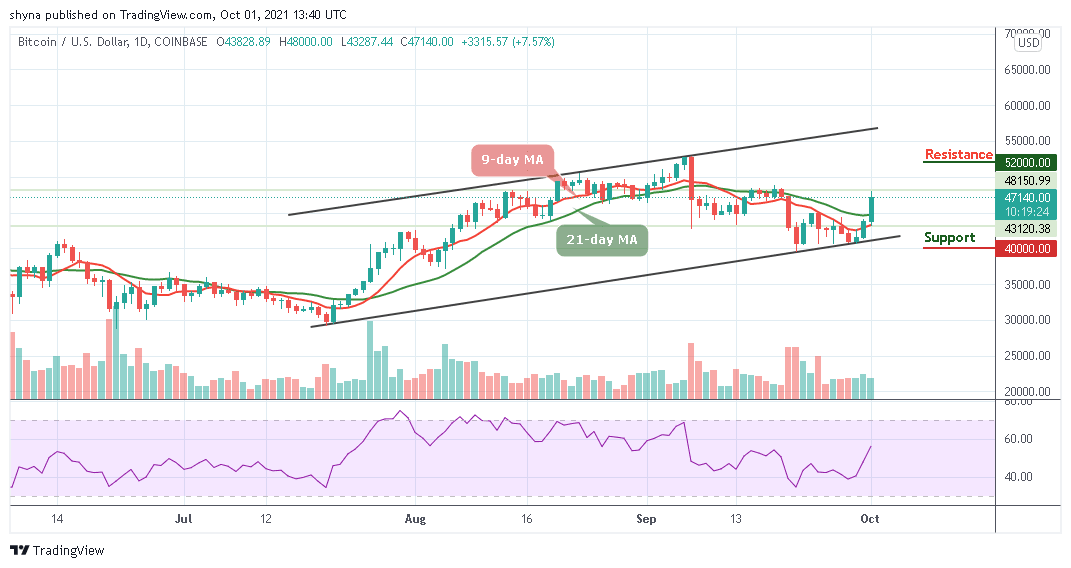 The Bitcoin price prediction shows that BTC revisits the resistance level of $48,000 as it targets a $52,000 high around the upper boundary of the channel.

BTC/USD is currently recovering higher from the $43,287 support zone and the first digital asset must stay above the 9-day and 21-day moving averages to start another increase. As of the time of this writing, the Bitcoin price still sits above $47,000 as a near $50,000 peak was seen with this recent rally during the European session today but currently retreating as the market prepares for another trading day.

According to the daily chart, traders could see that the Bitcoin price converges above the key level of $48,000. The 9-day MA trend-line is likely to cross above the moving average as they prepare to create more upsides. The technical indicator Relative Strength Index (14) moves toward 60-level in an attempt to probably cross into the upside. However, the first major resistance is near the $50,000 level while the main resistance is still near the $51,000 level.

According to the 4-hour chart, BTC/USD looks bullish as the market continues to show a sign of a bullish trend since the daily opening. However, the intraday trading is still looking bullish; following the recent rebound at $46,934 which is now a key support level. Meanwhile, any bearish movement below the 9-day moving average could locate critical support at $45,000 and below.

However, considering the recent sharp rebound, the Bitcoin price may continue the bullish rally to $50,000 resistance. A climb above the upper boundary of the channel may further push the BTC price to the resistance level of $50,000 and above. As it appeared now, it seems the bears may likely return to the market as the Relative Strength Index (14) could move below 70-level, suggesting a bearish movement.